The building to be rehabilitated is located at Rua Carlos dos Reis in Lisbon, in a block of Avenidas Novas and is characterized by an architectural language typical of the first decades of the 20th century.
The intervention consists of expanding 1 floor and changing the use of the store from the ground floor to housing. It is intended to rehabilitate two existing apartments with two bedrooms and reformulate the entire interior, restoring the original configuration. In order to bring together the necessary living conditions for the floor to be enlarged, it is proposed that the living room of the  apartment is oriented on the main facade and with a small kitchenette. In relation to the ground floor, a two bedroom apartment is also proposed, with the bedrooms facing the backyard on the back facade and the living room with Kitchenette facing the main facade.

The entire building receives treatment in terms of removing dissonant elements, such as sheds and non-original materials, restoring the initial design. On the back facade the marquees will be removed, creating a clean elevation, returning the balconies to their original design. The window openings will all be replaced by aluminum frames with thermal cut and the facade covered with traditional 10 x 10 cm tiles in light green color, with a mismatched joint in order to improve the durability and cleanliness of the materials, evoking, however, manuality traditional processes.

On the floor to be enlarged, sliding shutters will be placed in galvanized steel sheet, with a laser cut design, which will allow the interior light to enter the rooms. The same principle will be adopted in the ground floor apartment and on the balustrades of the balconies.

The building that was built in 1932, belongs to a period in which the vanguard and nostalgy evolved into an ambivalence of tastes and mentalities that made the buildings of this time present themselves, with different facades, in Avenidas Novas. The introduction of the French-influenced Art Deco style has become dominant in many buildings, however, the predominant feature of streets such as Carlos dos Reis, have a  geometrical and simple shapes at the facades.
The building  does not have to much architectural expression. It was built initially with only two floors and later in 1961 it had three floors. The street front facade is homogeneous and symmetrical, consisting of two doors and a central window on the ground floor.

On the backyard facade, which is currently quite uncharacteristic, it is proposed a structure sweetened to the facade for placing sliding opening folding doors in perforated metal plate, these being made of natural anodized aluminum, in order to provide greater privacy to the building’s residents. The existing balconies are maintained but with a new configuration, proceeding with the repositioning of the sanitary facilities, which are currently found on the balconies and adding a new balcony to the 3rd floor and the tiled floor.

The back façade takes on all the modernity, with the introduction of this 2nd “skin” consisting of a steel structure, which provides greater intimacy to the balconies, with perforated shutters in anodized aluminum in a natural color. The cover of the mansard will be used to coat the zinc sheet with a stapled joint. It will be two waters and is in accordance with the Lisbon Municipal Master Plan.

With regard to volumetry, we propose to increase the height of the façade from 2.55 m, with the increase of facade from 97.00 m to 99.55 m, thus maintaining the alignment with the contiguous building in accordance also with the Lisbon Municipal Master Plan.

On the 1st floor the spans are kept in alignment, with two windows, a balcony with a central bay window with repetition on the 2nd floor.

The architectural language used will respect proportions, scales, rhythms and some materials, however with a more contemporary approach to the rear elevation, since this elevation is related to the remaining buildings, all of them more decompressed, thus allowing the combination of the existing one with the contemporaneity, maximizing the use of light and insertion of shutters that will allow greater intimacy, due to the proximity of front buildings.
The introduction of the traditional green tile in the main elevation reinforces and contextualizes the building with the architectural morphology of Avenidas Novas, of an Art Deco character.

The expansion of the building by another floor and a mansard, is intended for two T1-type apartments in duplex, since according to Layout C of the Lisbon Municipal Master Plan in Article 42º, nº 6, point a) and b) “in the buildings of typology in band, the maximum height of the facade must obey the leveling of the heights of the existing facades in the surroundings ”. 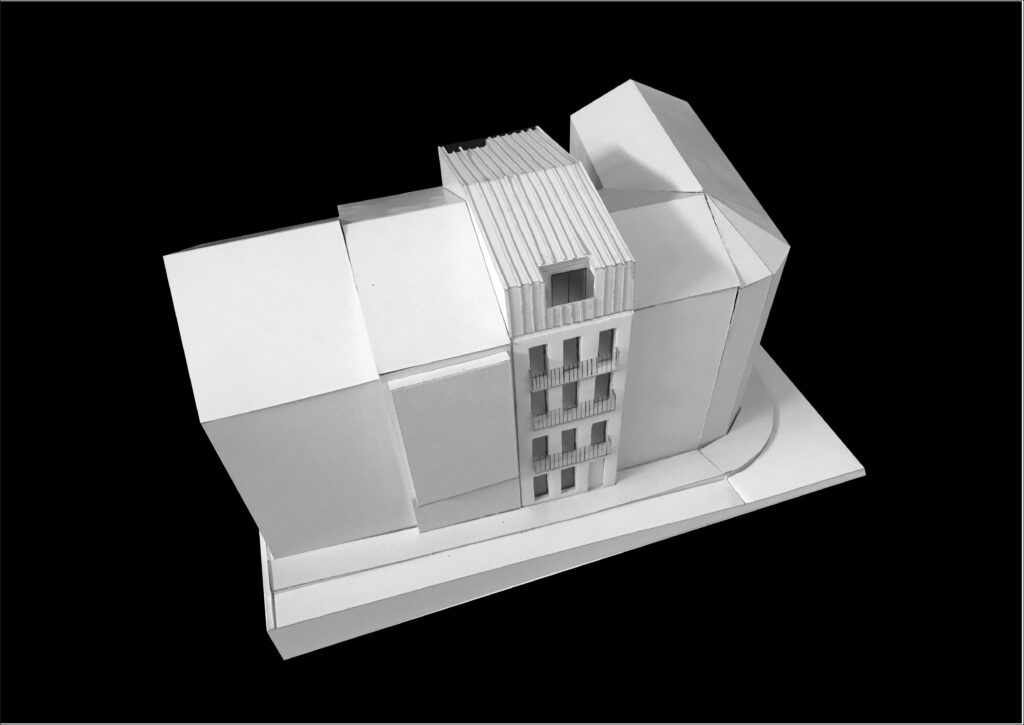 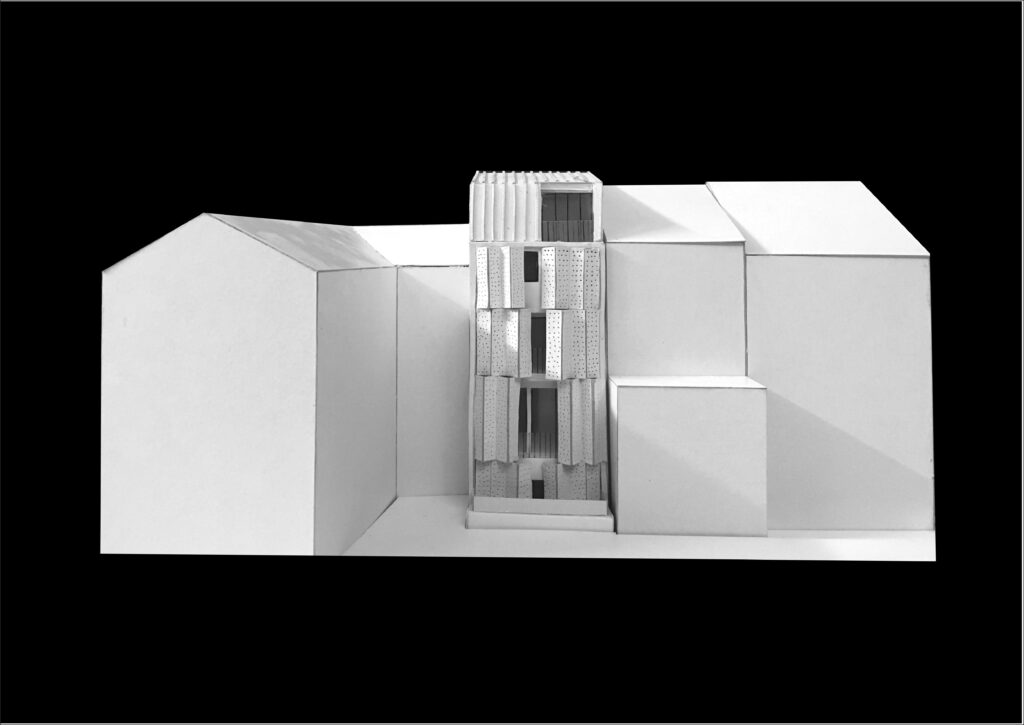 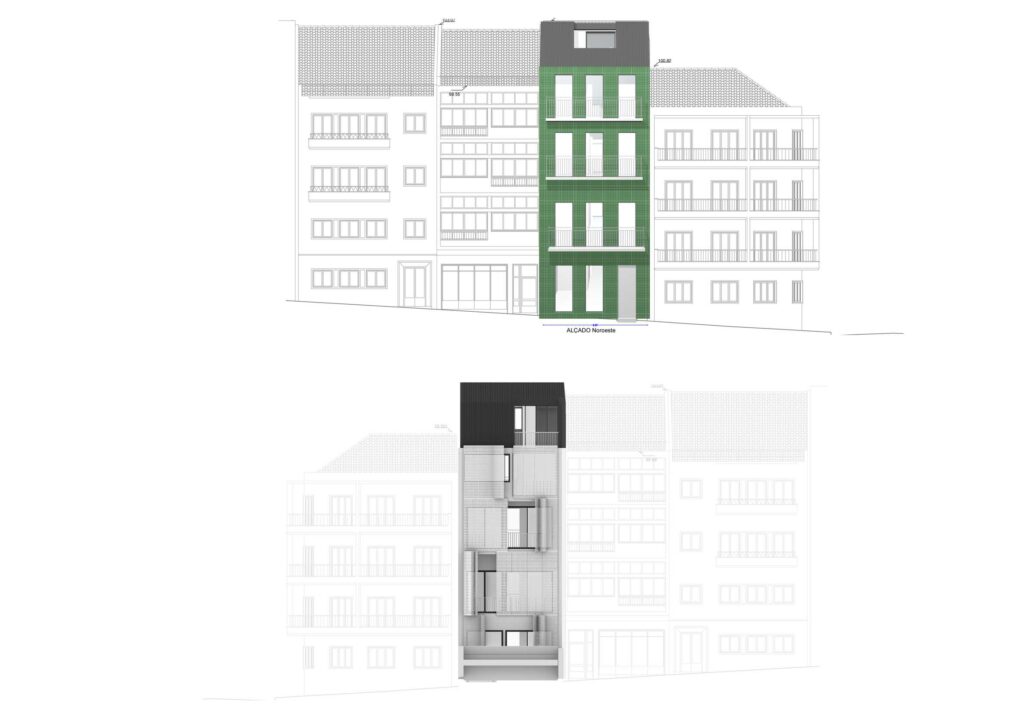